A GREAT DAY IN WYOMING

Nearing the last day of my visit to Wyoming, I decided to go into the next town and fill up my gas tank. I stopped at the gas station in Guernsey, filled up then started back to, Hartville. Though, I didn’t make it very far. At the last minute I spotted a sign that pointed in the direction on the Oregon Trail Wagon Ruts. I had heard about them, and was mildly intrigued to go there. Since I had time, and here was the sign pointing the way, I went.

After stopping to see the Wagon Ruts from years ago, I was glad that I’d stopped. I actually stepped down onto the rutted path, having an eerie sensation shoot through me as I thought of the families that had traveled this very path so long ago. 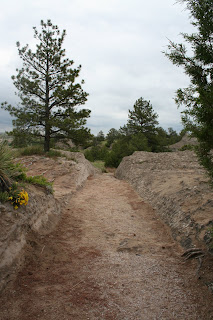 On the way out from the ruts, I encountered another sign. This one pointed to the, Registered Cliff. Not sure what that was all about, I proceeded to follow the signs. I past by an Army training base, which was pretty cool to see so close, having only previously seen one on TV.

When I rounded the road then turned onto a path that lead over a cattle guard, a large stone wall came into sight. Not knowing what I would be encountering, I parked my van and got out. There, along side the massive cliff, carved into its side were names and dates and states. Some new and some dating back as far as the 1800’s. Once again I was quickly swept back in time. 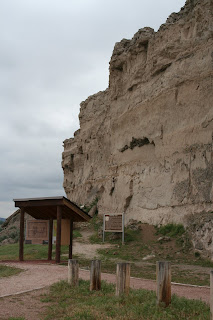 Up above I spotted what appeared to be mud balls with small circular openings. I was bewildered, but not for long. Soon I realized they were homes to the birds swarming overhead. 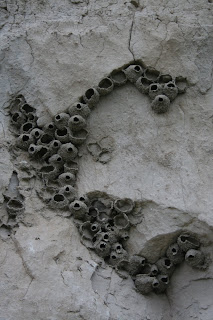 After my visit to the Wagon Ruts and the Register Cliff, I started back to Hartville, once again. As I passed through the town of Guernsey, I spotted a tiny library. On a whim I pulled around the corner and parked my van. I waited outside with a few others, awaiting the Librarian. It wasn’t long before she scurried towards the library, letting us know she was sorry she was late. Small towns seemed to be that way…laid back, and all.

As I stepped into the tiny library, I asked the Librarian if they had any history on Wyoming. Of course they did, just not material that I could take with me. I headed to the back of the library, searching for books they may have for sale. The Liberian noticed I was searching for something and asked if I needed any help. She directed me to the section of the shelf that held books that were for sale.

The Liberian jotted off to help, but later returned to where I was still scanning the shelf for books. One word led to another and she’d told me they had published author’s right there in, Wyoming. I’d asked her their names, wanting to write them down so I could look them up later. She then excused herself. I figured she was going to jot them down for me.

Several long minutes later the Liberian returned, but not with the scrap paper holding the authors names as I expected…but with one of the authors! So I was introduced to one of Wyoming’s authors, K.B. Ross.

For nearly two hours we talked about writing, her books, her family and Wyoming. I I learned small bits of her journey in writing her books, along with other interesting facts such as how the covers came about. She was kind enough to go home and get a few of the books she had so I could purchase them…complete with autograph, of course. She even sold me one of the libraries copies since I had shown an interest in that particular book and she didn’t have an extra copy.

So all in all, it was another amazing day in Wyoming.
Posted by Kym McNabney at 9:18 AM

Email ThisBlogThis!Share to TwitterShare to FacebookShare to Pinterest
Labels: A GREAT DAY IN WYOMING