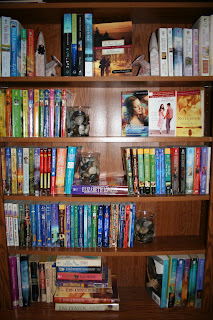 Yesterday I made the decision to try out Twitter and Facebook for my writing profile. I'm now on both but still trying to figure out how it all works. I've been trying to change the background on my Twitter to a picture of my bookcase I’d taken but it doesn't seem to want to come up. I'm guessing it's too large of a file, yet that doesn't sit right. I checked out Travis Thrasher's site and he has a background of his own making. For those of you who don't know who Travis is, he's an amazing author. Check out some of his books.

Oh well, maybe I'll give it a rest for now and come back to it later. Sometimes a new day can present itself with a clearer head, and things become clearer. Kind of like writing….write, then let it sit before going back to it for revisions.
Posted by Kym McNabney at 3:41 PM