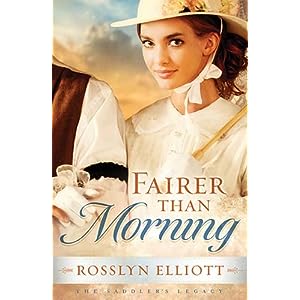 FAIRER THAN MORNING by Rosslyn Elliott threw me for a loop and took me by surprise. I felt as though I was taken back to the early 1800’s with Ms. Elliot’s amazing description and play on words. With three possible hero’s, I was kept guessing who would end up with the heroine, a unique twist from the stories I’m accustom to reading.

Ann Miller is pursued by Elie Bowen, a man any woman would be proud to marry. But there are lingering concerns, and when Ann travels with her father to Pittsburgh on business, she encounters two other men. Allan Burbridge, obviously smitten with her, but it’s Will Hanby that captures her curiosity.

Will, a saddle-maker’s apprentice, has suffered from loss of his family and abuse from his master. Upon his meeting Ann, the compassion he sees in her ignites in him hope that he long thought was dead. When Will is no longer able to endure the abuse of his master, he flees in hopes of finding Ann and her father.

The compassion of a few good Christians as well as Will’s growing faith was one to be admired. Ms. Elliott did a wonderful job conveying the hands and feet of Jesus in a natural and convincing way. I was truly humbled to read of their acts of Christianity as well as Will’s determination and faith despite his horrific circumstances.

As is often the case with me, I failed to read the back cover of FAIRER THAN MORNING, for if I had I would have realized the shocking information revealed in the final pages. I won’t give it away in case you’re like me, and love a good surprise.
Posted by Kym McNabney at 8:48 AM

Email ThisBlogThis!Share to TwitterShare to FacebookShare to Pinterest
Labels: A WONDERFUL TWIST