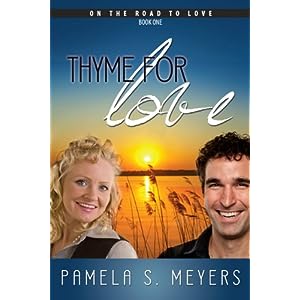 THYME FOR LOVE by PAMELA S MEYERS is a fun, light mystery. Having never read this type of novel, I was initially confused by the casual, witty mystery. What later came to mind was Sherlock Holmes and the game Clue. Not more than a few pages later, MS. MEYERS mentioned that very thing. That's when it all clicked. Thoughts of who done it, in which room, with what, ran through my mind. I was pleasantly surprised with how much I enjoyed THYME FOR LOVE, not being the genre I typically read. A true testament to how well it's written.

April Love is in need of a job, and her Aunt Kitty has just the job for her. But what she fails to tell April is her ex fiancée, Marc Thorne, works there. Now she is faced with the decision to quit a job she desperately wants or face the man who hurt her years ago.

Marc Thorne is just as surprised as his ex fiancée, April when she walks into the Rescate. It doesn't take long for old feeling to stir. But Marc has a secret he fears will douse any hopes he has of renewing their love. Convincing April they were meant to be together isn't the only obstacle he faces. When he's accused of murder, will she believe he's guilty?

The mouth watering descriptions of the food April prepares, sent my stomach rumbling. MS. MEYERS delivered countless cute lines as well as kept me guessing as to "who did it". THYME FOR LOVE was hard to put down as I attempted to figure out who the killer was.

My favorite type of novel is those involving a cowboy and a ranch, so of course Karl had me sitting on the edge of my seat, hoping he wasn't the killer. I can't wait to read the next two books in this series...And I'm hoping to see a cowboy or two.
Posted by Kym McNabney at 8:00 AM