A MIX OF EMOTIONS 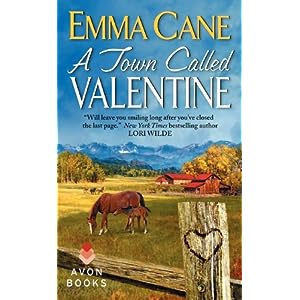 Emily Murphy returned to her mother’s hometown for one reason and one reason only. For a quick sale on the building willed to her. But as life often goes, another plan started to materialize.

Nate Thalberg is a real ladies man. Not that any woman got past his ten date rule. Nate has wounds, and refuses to hurt another woman…or himself for that matter.

Emily discovers something she never imagined. As her mother’s secret unravels, so does Emily’s heart. Nate learns to live life, and in the process discovers he may have found the woman he wants to spend the rest of his life with.

If there ever was a book that stirred up mixed feelings, it’s A TOWN CALLED VALENTINE by EMMA CANE. The cover is what originally caught my eye like it so often does. The back cover blurb was intriguing. I’ve never read one of MS CANE’S books in the past, so after starting it, I looked to see what other books she wrote on Amazon. I was surprised to discover this was her first, it was that good.

The first half of the book read at a steady pace, had a good plot, and was well written. So well written I searched the internet for more information on MS CANE. It was then that I discovered this was not technically her first book. Just her first under this genre, and using the name EMMA CANE.

What I didn’t like about A TOWN CALLED VALENTINE:

-The second half of the book contained repetition and telling.
-Lack of peaks.
-Lack of tension between any of the characters.
-The characters casual sex.
-The foul language.

What I loved about A TOWN CALLED VALENTINE:

-The words the author chose.
-The characters.
-The plot.
-The fictional Town of Valentine Valley.

Though I would have preferred no sexual encounters between the characters, the author didn’t get as detailed as she could have, and for that I was grateful. I also prefer no foul language, and again MS CANE didn’t go overboard with that as well.

I loved the plot, though I felt she could have stepped it up. There were many opportunities for amazing tension filled scenes. I felt everything was kept on an even-keel. The characters were well thought-out, with such great goals and motivations; the potential for some amazing conflicts was overlooked.

For the first time ever I kept paper and pencil nearby as I read this novel to markdown evey word or phrase I came across that intrigued me. One of my weaknesses as a writer is my limited vocabulary, I found MS CANE’S brilliant. Her choice of words never felt forced or misplaced. For that alone this books was worth reading.
Posted by Kym McNabney at 8:00 AM

Email ThisBlogThis!Share to TwitterShare to FacebookShare to Pinterest
Labels: A MIX OF EMOTIONS