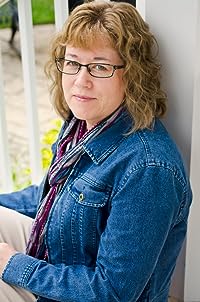 Cindy Thomson is a writer and an avid genealogy enthusiast. Her love of history and her Scots-Irish heritage have inspired much of her writing, including her new Ellis Island series. Cindy is also the author of Brigid of Ireland and Celtic Wisdom: Treasures from Ireland. She combined her love of history and baseball to co-author the biography Three Finger: The Mordecai Brown Story, which was a finalist for the Society for American Baseball Research's Larry Ritter Book Award. In addition to books, Cindy has written on a regular basis for numerous online and print publications and is a mentor for the Jerry B. Jenkins Christian Writers Guild. She is also a member of American Christian Fiction Writers and the Historical Novel Society. Cindy and her husband have three grown sons and live in central Ohio. Visit her online at www.cindyswriting.com or on Goodreads https://www.goodreads.com/cindythomson.

Annie’s Stories tells the story of Annie Gallagher, an immigrant from Ireland. We first met Annie in Grace’s Pictures, the first book in the Ellis Island Series. Annie is the housekeeper at Hawkins House, a boarding house for new immigrants run by Mrs. Agnes Hawkins.

Annie, can you tell us how you came to work at Hawkins House?

Oh, now, that’s a question that requires a whole novel to explain. But I’ll give you just a bit of it. I had the unfortunate experience of being put in a place called a Magdalene Laundry back in Ireland, and against my will too! I’ll not tell you how I got out, but I was sent to Hawkins House in Manhattan where a woman named Mrs. Hawkins (better known to some of us as the Hawk) set me up as her housekeeper. I was happy to be there, but I wanted more for my new life in America. The stories my father wrote for me turn out to have a part in helping me achieve my goal, and then some!

On the cover you’re holding a copy of L. Frank Baum’s The Wonderful Wizard of Oz. Can you tell us why? I mean, it is a children’s book. 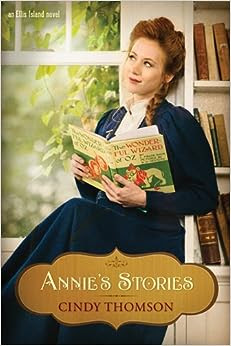 Then perhaps you’ve not read it? The book is a wonder for several reasons. I was drawn to the story because Dorothy Gale feels neglected by her aunt and uncle, and everything in Kansas is so gray and unwelcoming. She wants excitement. And she certainly gets that in Oz. I know what it’s like to feel that way. And besides all that, the book is printed in such wonderful colors. I had never seen anything else like it. And as for it being for children, ’tis a well-known fact that Mr. Baum has stated the book will appeal to adults as well as children. I would not be surprised if someone made a stage production out of this story. I’ve read it more than once.

Tell us something about the other characters who appear in Annie’s Stories.

Well, there is Mrs. Hawkins, of course. She’s a kindly soul, but rather mysterious. Readers will learn a lot more about her than they did in Grace’s Pictures. Grace and Owen from the first book in the series are in Annie’s Stories as well. Readers of Grace’s Pictures will remember Reverend Clarke and Mr. Parker. There is a terrible Pinkerton man, although if you want my opinion he should not be around at all. And then my troublesome cousin Aileen comes through Ellis Island from Ireland, like I did except not from the laundry. She really should have been the one sent to the laundry, although I would not have wished that on her or anyone. But I’ll let you read about that. We have a new boarder at Hawkins House named Kirsten. She and her perplexing brother Jonas keep us busy. And then there is Stephen Adams the postman. I won’t tell you much about him except that he’s handsome. There are a few other important folks, but you can meet in them in the pages.

I hear that you like to read. Why are books and stories so important to you?


I was raised on stories. My father, God rest his soul, was a seanchai back in Ireland. That’s the word for storyteller. It was his occupation. Stories and the telling of them is my precious link to his memory, and without that I would feel lost. Stephen loves books as well, and he even lives over top of the offices of a publisher. Books feed our souls in a way that no other entertainment can. Wouldn’t you agree?


Thanks so much for chatting with us, Annie. We look forward to your story.


Thank you for inviting me. I hope we meet again in the pages of Annie’s Stories.

The year is 1901, the literary sensation The Wonderful Wizard of Oz is taking New York City by storm, and everyone wonders where the next great book will come from. But to Annie Gallagher, stories are more than entertainment—they’re a sweet reminder of her storyteller father. After his death, Annie fled Ireland for the land of dreams, finding work at Hawkins House.

But when a fellow boarder with something to hide is accused of misconduct and authorities threaten to shut down the boardinghouse, Annie fears she may lose her new friends, her housekeeping job . . . and her means of funding her dream: a memorial library to honor her father. Furthermore, the friendly postman shows a little too much interest in Annie—and in her father’s unpublished stories. In fact, he suspects these tales may hold a grand secret.

Though the postman’s intentions seem pure, Annie wants to share her father’s stories on her own terms. Determined to prove herself, Annie must forge her own path to aid her friend and create the future she’s always envisioned . . . where dreams really do come true.


A glimpse into
Grace's Pictures

“Listen to me,” her mother had said. “I don’t care what lies your father once spoke to you, darlin’. . . . Remember instead this: You are smart. You are important. You are able.”
Grace McCaffery hopes the bustling streets of New York hold all the promise the lush hills of Ireland did not. As her efforts to earn enough money to bring her mother to America fail, she wonders if her new Brownie camera could be the answer. But a casual stroll through a beautiful New York City park turns into a hostile run-in with local gangsters, who are convinced her camera holds the first and only photos of their elusive leader.

A policeman with a personal commitment to help those less fortunate finds Grace attractive and longs to help her, but Grace believes such men cannot be trusted. Spread thin between her quest to rescue her mother, do well in a new nanny job, and avoid the gang intent on intimidating her, Grace must put her faith in unlikely sources to learn the true meaning of courage and forgiveness.
Posted by Kym McNabney at 6:00 AM