I’ve been working, working, working and finally, I finished and submitted my short story for the contest I was working on, Hearts Crossing! I won’t know until the end of the year if I’ve won or not but in my eyes, I already have.

I’ve learned so much from this experience including what it takes to meet a deadline. I was also challenged as a long winded writer, to write a short story, less then 25,000 words. And if all that wasn’t enough, a publishing company will be reading my work.
Posted by Kym McNabney at 1:42 PM No comments:

Email ThisBlogThis!Share to TwitterShare to FacebookShare to Pinterest
Labels: EITHER WAY, I'VE WON 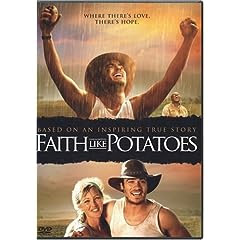 FAITH LIKE POTATOES is a wonderful movie. It was inspirational and moving. Make sure to watch the documentary on Angua Buchan's story as well. It made me want to watch the movie all over, again.

In watching this amazing story, I was quickly brought back to the exact moment I truly accepted Jesus into my heart, along with the trials and tribulations that can follow. So very true to life.

Frank Rautenback did an amazing job at playing, Angus. I hope to see him in more movies in the future. Angus' story is a true inspiration, and a lesson we all should not just grasp but live out.

Listen to your calling, and then dive in...no matter what.
Posted by Kym McNabney at 1:28 PM No comments:

WHAT I'VE LEARNED ABOUT WRITING - ENTRY #2

I've recently discovered that when starting a new novel, it can take you approximately 20,000 words before you REALLY get into the story. Before it really starts flowing and you get a sense of where you’re going.

So keeping that in mind, write away!

One of the crucial words of wisdom I absorbed from reading Stephen Kings book, ON WRITTING, is to just write/start. The first draft is always the roughest, so know that and get over it...and past it.

Get the story out, and worry about the rest, later.
Posted by Kym McNabney at 9:40 AM 1 comment:

Email ThisBlogThis!Share to TwitterShare to FacebookShare to Pinterest
Labels: WHAT I'VE LEARNED ABOUT WRITING - ENTRY #2

SING ME TO SLEEP, WINS MY HEART 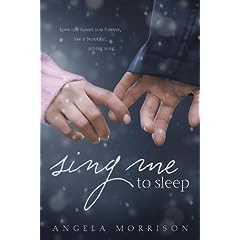 SING ME TO SLEEP, WINS MY HEART

Wow, where do I begin. I was blown away when I read TAKEN BY STORM by Angela Morrison’s, so I had no doubt, SING ME TO SLEEP would be good. Yet I couldn’t have begun to foresee what an impact Beth’s story would have on me.

When I finish reading a book, I often run to the computer to write my review. Not so with SING ME TO SLEEP. There was no way I was emotionally ready after finishing the final pages. Heck, I wouldn’t have been able to see the screen, anyway.

I was pre-warned that I would need a box of tissues. Silently I said to myself, I don’t think so. As an avid reader, I’ve read my share of tearjerkers. One tissue, maybe…but a box? I don’t think so.

I couldn’t have been more wrong.

As an aspiring writer, I was in awe of Ms. Morrison’s writing as I read one great line after another. There was nothing I would have changed and that’s saying a lot. It exceeded anything I could have conjured up. She has a uniquely amazing way with words. Each line was perfect in every way. I laughed. I cried. I was angry. I smiled. I felt every emotion Beth, Derek, and Scott experienced. I felt as though I were right there in the midst of their lives

On page 88, my jaw dropped. Some of the sweetest words you could image came from Derek and Scott. Ms. Morrison is more then a writer of fiction. She’s a poet and a song writer as well. I was so caught up in the story that I longed for a soundtrack of, SING ME TO SLEEP.

I was taken back to my school days, living them through Beth and Scott. Many faces came to mind of past schoolmates. Kids today need to hear this story, as do teachers and parents.

SING ME TO SLEEP is filled with trials, and tribulations, as well as friendship, love, hope and faith. It was moving, gripping and intense. It set me on an emotional rollercoaster from the very first line to the very last!

I have never experience a book such as SING ME TO SLEEP where I sensed what direction the author was taking the characters early on, then doubted my decision several times, then was blown away by the final chapters.

This morning after the kids left for school and my husband for work, I sat down in the living room to read the remaining seventy pages. God must have known I would need the solitude. I began to read and couldn’t put it down. There were moments where I was chocked up but I kept reading, absorbing every word.

I held back my emotions…until I got to page 291. That’s were I lost it! I have never HAD to step away from a book before. After several long minutes, I was finally able to pull myself together enough to read the final pages. This was not the first time I’ve cried or got caught up in a book but NEVER to this capacity. I was an emotional wreck through the last three chapters. They were truly the most powerful chapters I’ve ever read.

This book is a must read for preteen, teens, young adults, teachers, parents, and so many more. One can not help but get caught up in the lives of these characters, each one beautifully done. I savored and absorbed every word, often rereading many lines because they were that good.

I see “movie” written all over this book. If some producer doesn’t snatch it up, they’ll be missing a great opportunity.

Watch out, Nicholas Sparks.
Posted by Kym McNabney at 2:39 PM No comments:

Email ThisBlogThis!Share to TwitterShare to FacebookShare to Pinterest
Labels: SING ME TO SLEEP, WINS MY HEART

"Therefore, my beloved brethren, be ye steadfast, unmovable, always abounding in the work of the Lord, forasmuch as ye know that your labor is not in vain in the Lord." 1 Corinthians 15:58 (KJV)

Bestselling authors, publishing industry representatives, and newcomers to Christian fiction writing will gather in Denver at the American Christian Fiction Writer’s annual conference September 17-20 to compare notes, learn from each other, and encourage one another in the pursuit of publishing goals.

This year’s conference theme , Standing Firm…Moving Forward, will especially inspire the full range of talent and dreams in the ever-changing publishing world today.

This amazing conference will feature representatives from major publishing houses like B & H, Guideposts, Zondervan, Harvest House, Barbour, Steeple Hill, Summerside Press, Bethany House, Waterbrook Multnomah, Marcher Lord Press, Tyndale House, and Thomas Nelson, and top literary agents who will meet with writers and identify promising proposals from both new and veteran novelists. Conferees will have access to publishing panels, professional critiques, and customized workshops based on skills and interests.

The keynote speaker is New York Times bestselling author, Debbie Macomber, who has more than 100 million copies of her books in print worldwide. 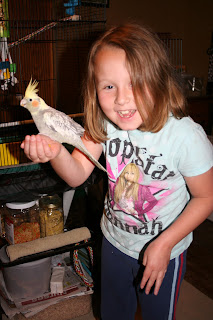 I never thought I'd own a pet bird but now I'm an official bird owner. I've always been fascinated by birds. Loved their singing and chirping. Always found it to be very peaceful and soothing.

But owning one...that's a whole other thing.

My middle daughter, my huge animal lover of all animals, wanted a bird in the worst way. We went to Tennessee a few years back and visited, Parrott Mountain. Since them my interest in birds spiked, as did her.

After weeks or researching different kinds of birds and asking anyone and everyone I found that owned a bird about their experience and what kind they owned, I finally made the decision to purchase a feathered friend.

So now we have, Coco the Cockatiel. The first two weeks were a little rough. They told us it would take about two weeks for the bird to become comfortable in his/her new surrounding and to bond with someone. Birds bond with one person, though they can be friendly to others as long as you handle them a lot and have them around others, often.

I was afraid that since I was the one home all day and cleaning out the cage, etc., that the bird would bond to me. My daughter would not be happy if that happened. After all, we did get the bird for her. Coco would first protest being held by pecking at you, and this sent my daughter over the edge. She thought the bird hated her.

Thank goodness, about two weeks into having our new addition to our home, Coco quickly became my daughter’s BEST friend. Oh was she happy…we all were. She walked around for weeks saying, “I can’t believe I have a bird”. Now you should see them. She can do anything thing to this bird! She kisses it, even Eskimo kisses, gives it “baths”, takes it on car rides, watches TV with it, and even takes it to watch her sister’s ball games. You should see the looks we get.

At the ripe old age of eight, my daughter dreams of one day being a Veterinarian at a zoo while she lived on a ranch. She wants to be able to be in the mist of ALL types of animals!

Coco is great fun, I must admit. Coco and my daughter whistle from one room to the other at one another. He/she (not sure which, yet) actually gets excited when she comes into the room. Coco runs down the side of the cage, ready for her to take him/her out.

Another bird just may be in our future!
Posted by Kym McNabney at 8:49 AM No comments: