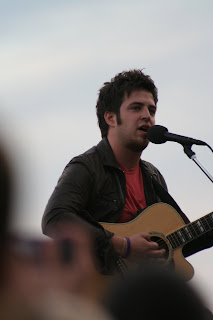 Only days before Lee DeWyze was scheduled to be in Illinois, I was set upon a rollercoaster ride so it seemed. Thanks to posting a comment on Capannari’s Ice Cream facebook page, I received an offer for three tickets to the Lee DeWyze concert at Arlington Park. Only problem was I wasn’t sure if I’d be able to go. My oldest daughter, whom would have loved to go, had a play that night. I was supposed to go to an ACFW Northwest Chapter meeting.

I asked my two youngest daughters if they’d be interest in going to the concert, and of course they were. Unfortunately, I didn’t get word back to the woman who’d offered me the tickets in time, and she gave them away.

I truly believe it what’s meant to be, is meant to be. Now if I’d been really set on going, I would have worked harder to have made it happen. But it just so happens that for whatever reason, God wanted me to be there. A friend that I know through the Prison Ministry at my church offered me tickets, once again through facebook.

The only problem…there were only two tickets!

It was tough but after much thought, and many talks, in the end my daughter and I went. We quickly made our way to where we thought was a good spot; just to later discover it wasn’t a good place after all. When a man in a suit made his way along the tracks in front of us, handing out tickets for something, my heart began to race. But he passed us bye and we'd seemingly lost our chance.

God had other plans. The same man came back, passed us once again, and then headed back toward us. This time I wasn’t about to miss out when we were so close, not once but several times. I waved him down with what I expect was a PLEASE written on my face. He stopped…and handed me tickets!

We were on our way.

We followed others in hopes of discovering where we were to go.

We descended the concrete steps, making our way down to the front when we were suddenly stopped by a closing gate. “Sorry, you’ll have to stay here. We have too many down below”. Darn, we’d almost made it…but that’s okay. We were grateful for the better seats God just provided us with. And graciously accepted our fate.

But God wasn’t done. Minutes later, the gate opened and we were allowed to go down closer! We had a wonderful time, and I feel so blessed to have been part of what may have been a once in a life time event.
Posted by Kym McNabney at 12:02 PM

I just love how God worked it out for you Kym! And I got to see him in the parade earlier! What a blessing yesterday was! Thank you, God!

What fun! Isn't it great how God works things out for us, even when it's not a "need" but a "want."