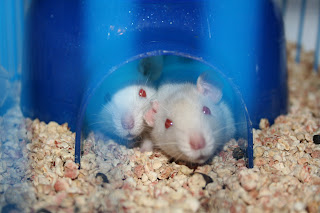 If there’s one thing I learned about being a rat owner for years, it's that not everyone shares our love of rats. We waited three weeks for these cute little girls to be old enough to take home from the pet store.

As you may have read in my previous blog entry, my oldest daughter adopted two male rats from a pet store, Ralphie and Dumbo. Our first experienced with male rats. So far they are great, but I later found out that there is one particular trait that is not so desirable. Hopefully we won't regret our decision for the opposite sex.

My youngest daughters have been waiting for female rats to be ready to take home for three weeks. They were so happy when we got the call, telling us they were old enough to be adopted. We immediately went to see them. And of course we then took them home.

Their names are Cinnamon and Starlight. What do you expect, their “mothers’ are only six and eight. The rats my girls had before were fondly named, of course complete with middle names, Cupcake Coffee and DQ Dairy Queen. How’s that for pet names!

Email ThisBlogThis!Share to TwitterShare to FacebookShare to Pinterest
Labels: FOR ALL YOU RAT LOVERS...HA, HA