I was in Prison and You Visited Me

“Don’t forget about those in prison. Suffer with them as though you were there yourself. Share the sorrow of those being mistreated, as though you feel their pain in your own bodies.” Hebrews 13:3

My name is Kym, and I’ve been serving as the Coordinator for the Adult Prison Pen Pal Ministry through Willow Creek since 2006. I’ve been writing to inmates since 2004, visited Angola State Penitentiary (in Louisiana), Cook County Jail, and IYC Warrenville. Letter after letter, visit after visit, my heart runneth over with the blessings I’ve received from this amazing ministry.

Jesus on California and 31st Street

After checking in for my volunteer assignment at Cook County Jail, I glanced around at the twenty five volunteers; many there for the first time. I couldn’t help but smile, knowing the blessing they were about to experience. Together we unpacked box after box of food and serving supplies in preparation for Thanksgiving dinner.

Assembly Line For The Lord 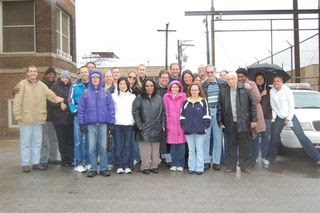 Our team was assigned to serve the entire 14th Division, providing food for 450 inmates and 40 officers per shift. The entire meal cost $5339, of which $4869 was raised through private donations. As the inmates lined up on either side of the room, we shared in songs of worship and prayer. One by one they made their way down our assembly line, each to receive a complete Thanksgiving meal. Even eighty-seven year old volunteer, John, joyfully handed each inmate a cookie. Tears threaten to escape my eyes as each inmate expressed their sincere gratitude.

God Behind the Razor Wire

What we gave…food and our time. What we received…our hearts filled with the love of Jesus for these men. Carrie – “Serving Thanksgiving at the Cook County Jail reminded me that Jesus loves everyone, and we all matter to him. As I served and saw the smiles and gratitude from these men, I knew that is just where God wanted me that day. I believe those men were blessed, but God also blessed me that day.” Karel – “This was my first time going outside my comfort zone and doing something like this. I have to say I felt like I gave so little and they were so appreciative, some were even in tears. It was so important for them to hear that Jesus loves them and that someone cares. Everyone needs to feel that unconditional love and be accepted were they are before they can begin to love themselves.” Michelle – “I was encouraged and enjoyed it and impressed how respectful the inmates were.” Scott – “I was thankful that God used me to actually give in my serving food on Thanksgiving.”

The Cook County Jail Team currently consists of fifteen volunteers who serve regularly by bringing prayer, fellowship and Christ’s love to the incarcerated. The administration is reviewing the applications to add another seven individuals. If you would like to learn more about the Cook County Jail team or other serving opportunities in the Prison Ministry, please contact Ann Rand – arand@willowcreek.org

For God so loved the world that he gave his one and only Son, that whoever believes in him shall not perish but have eternal life. (John 3:16 NIV) 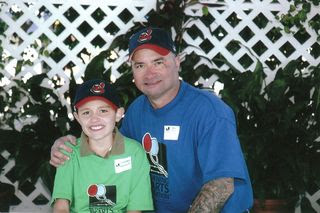 Kyle Hebert makes no excuses for what he did or where he is today. He freely admits that he and he alone is responsible for his sins. He doesn’t play the blaming game as so many often do. Kyle has many accomplishments to his name since entering the gates of Angola State Penitentiary in May of 2000. As an inmate of the largest maximum security prison in the United States, he is also a 2007 graduate of the New Orleans Baptist Theological Seminary, Angola Extension Campus with an associates and bachelors degree in Christian Ministry. He’s completed many classes including Anger Management and Substance Abuse. Kyle’s also a Class-A trusty and a staff writer for the prison magazine, The Angolite. Taking 10 years to achieve, a Class-A trusty, the highest level, he must avoid being disciplined or written up for an offense, and set an example for other inmates to follow.

Not so many years ago, Angola was the bloodiest prison in America. Now it’s considered to be the safest. Many have speculated why Angola turned around, but for anyone who has visited the prison, they leave knowing exactly what has brought about this miraculous change. And that change can be summed up in three letters: G.O.D. When Burl Cain became the Warden of Angola State Penitentiary, he brought the word of God. He has promoted moral rehabilitation by allowing Christian ministries from all over the world to worship with the men of Angola.

Matthew wrote in a letter to his dad, “Hi dad, I had a good time. I can’t wait til next year. I didn’t want to say goodbye. I love you with all my heart and Jesus does too. John 3:16 says, God so loved the word that he gave his one and only son for who ever believes in Him shall not parish but have eternal life. Bye dad, love you.” Love your son, Matthew

A Miracle Through Surrender and Faith

If you met Kyle at Angola State Penitentiary, you would find a miracle. One would have a hard time believing that Kyle was once the man he claims to have been. His story is one filled with hope and love. “I’m not a poster boy for good behavior and recovery in Angola.” Kyle says. “I’m just a guy who knows he has a lot to be grateful for and a God who gets all the credit. He gave his son so that I may now have mine.”

Willow Creek’s Prison Ministry has many volunteer opportunities from writing to the incarcerated, to making cell visits, to donating inspirational Christian fiction to the girls at IYC Warrenville. If you feel led to this ministry, check out a few of the opportunities on Willow’s website under Compassion and Justice. 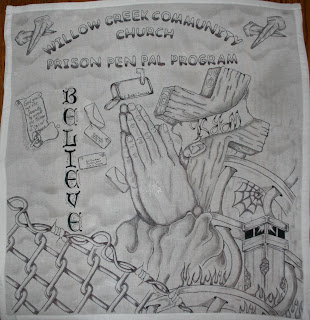 “You can’t help everybody, but you can help a few. It’s that few that

God will hold us accountable for.”

My name is Kym, and I’m the adult pen pal program coordinator at Willow Creek. Several years ago, God placed in my heart the desire to start serving but I had no idea where. I had many passions, little money, three young children, and a husband working two jobs on a rotating shift. Not much room for a commitment.

God is good, perfect in His timing and knows exactly what’s best for us. He answered my prayers with a miracle. In October of 2004, I received the first of many pen pals. When I wrote, I felt comfort knowing this was what I was called to do. I soon discovered my spiritual gifts were discernment, encouragement, and mentoring: three very important gifts in the prison ministry.

I diligently wrote to my pen pals for a couple of months before deciding I could take on a few more. Several weeks later I received six more. In November of 2006, I visited Louisiana (Angola) State Penitentiary. A few weeks upon arriving home, I acquired another eighteen pen pals. Not something I’d recommend to most, yet for me it has been a fantastic journey of faith.

Some pen pals have stopped writing, while others are still faithfully writing. I’ve also picked up others through different means. It hasn’t been without challenges, but I’ve grown more spiritual mature through this ministry.

Each one of my correspondents holds a special place in my life. God has blessed me in ways I never could have imagined through this ministry because I am constantly witnessing God’s grace, mercy and love.

“Encouragement and letters are the hope these young girls need. God is always at the center, so He places all the pieces together and finds his way in their hearts. It is a privilege to serve at the Youth Correctional Center in Warrenville, IL.”

“The Pen Pal Ministry is exciting. The ministry is for anyone who can write a letter. It is relatively easy to produce fruit solely offering Christ’s love. A letter means a lot to us on the outside; it means much more to those inside.

Have a heart for those incarcerated? The need for volunteers is so great; there is currently over a two year wait to connect inmates with a pen pal. You can signup by accessing Willow’s website, http://www2.willowcreek.org/volunteer/details.asp?F=2&ID=132713&Page=0&RegID=None&C=588.