MISSION OF HOPE, MORE THEN I COULD HAVE HOPED FOR 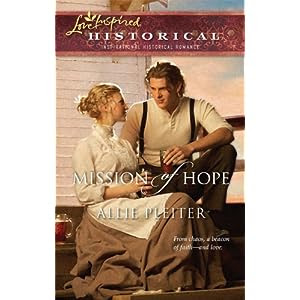 Wow, wow, and triple wow. MASKED BY MOONLIGT was the first book I read by Allie Pleiter, and it blew me away. I’ve since read the Kentucky Corners series, and though they were good, I longed for another MASKED BY MOONLIGHT. When I heard she was writing a sequel, I was overjoyed.

The cover captured me immediately and being a historical, well I just had to read it. But what I hadn’t expected was that THIS was the sequel to MASKED BY MOONLIGHT. You can’t imagine my excitement when I made the discovery.

As an inspiring writer I was blown away by Allie’s writing, the plot, and the wonderful characters. All of them captureD me, so realistic as if they would suddenly step out of the pages. I'm in awe of how she writes so completely different from the Kentucky Corners, to a Historical.

I will miss Quinn, he’s such a neat characters.
Posted by Kym McNabney at 7:51 PM

Email ThisBlogThis!Share to TwitterShare to FacebookShare to Pinterest
Labels: MISSION OF HOPE, MORE THEN I COULD HAVE HOPED FOR