Lillian Duncan lives in Ohio with her husband, four parrots, one Jack Russell, and a Cavalier King Charles Spaniel that she's thinking about renaming Clifford since he keeps growing and growing and....


Her website (www.lillianduncan.net)describes her books as Stories of Faith mingled with...murder and mayhem. She writes the type of books she loves to read--suspense with a touch of romance. Depending on her mood, some books have more romance than others.

She's been a Speech Pathologist for over thirty years. Whether as an educator, a writer, or a speech pathologist, she believes in the power of words to transform lives, especially God's Word. 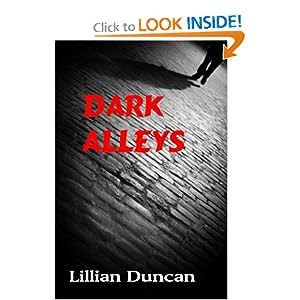 
Q: TELL US ABOUT DARK ALLEYS.


A: DARK ALLEYS is a suspense-filled story about a woman who ends up homeless and alone in a dark alley on a cold winter night. She witnesses a murder while in a drunken stupor and almost becomes his second victim. She awakens in the hospital with no clear memory of how she was injured. She attempts to put her life back together but, of course, the murderer has other plans.

Here’s the back cover blurb:


Being innocent and proving it are two different things, especially when a powerful politician is involved

Tessa’s life spiraled out of control after the death of her only child, and she finds herself in a dark alley on a cold wintry night. After she witnesses a murder, she almost becomes his second victim, but manages to escape—just barely.

Homeless and alone, she knows the authorities won’t believe someone like her, leaving her only one option—to run.

Q: IS DARK ALLEYS THE FIRST BOOK YOU PUBLISHED?

A: No, I’ve published several others. Last year I published DECEPTION and PURSUED. I love to write books that have an element of mystery or suspense along with some romance.

Q: WHY DID YOU WRITE DARK ALLEYS?

A: I always root for the underdog—sometimes I have to do it in secret so my husband won’t know just how uncompetitive I am. Anyway, I wanted to write a story where the main character was the queen of underdogs and I think I did that.

Q: WHAT DO YOU WANT READERS TO TAKE AWAY FROM DARK ALLEYS?

A: At one time or another most of us end up in dark alleys, but God never deserts us. And that’s what I want readers to take away from this story. No matter what we’ve done, God never stops loving us.

Q: WHAT IS YOUR WRITING PROCESS? DO YOU OUTLINE YOUR STORIES IN ADVANCE?

A: I am not an outliner. I wish I were—it seems easier to me. But my mind doesn’t work that way. I never know what is going to happen in my story on any given writing day. It’s as if my mind is a movie screen and I watch that day’s events and then I write it.

Q: When I start a new story I usually have a clear picture of the main character in mind and what obstacle he/she will face.

A: For example, in DARK ALLEYS I knew I wanted the main character to be homeless-the very epitome of powerless-and her opponent to be very powerful. When I started the story I didn’t know why she was homeless but as the story evolved, I learned more about Tessa and what brought her to that dark alley.

In another book, PURSUED, I knew I wanted the female lead to be a powerful type A personality and the male lead to be a laid-back, down-home kind of a guy. It was fun to watch the two of them interact with each other.

Q: DO YOU KNOW WHO THE BAD GUY IS WHEN YOUBEGIN YOUR STORY?

A: Not usually. Most of the time I have several characters who it might be and as the story comes to a conclusion, I am surprised right along with my readers.

In the case of DARK ALLEYS, I knew as will the readers who the bad guy is from the start. The mystery and suspense comes in from not knowing if Tessa will discover the murderer before he succeeds in his second attempt on her life.

Q: MOST PEOPLE DON’T THINK OF MURDER MYSERIES AND SUSPENSE NOVELS AS CHRISTIAN FICTION, WHAT DO YOU SAY TO THEM?

A: I can certainly understand their point of view. And for some readers my stories might be a bit too graphic or edgy and that’s ok, I understand that. I would say my readers are those who like traditional suspense and mystery novels but are tired of all the explicit language and sex scenes that aren’t necessary to a good story.

I don’t promote or glorify violence in my stories and show characters experiencing the natural consequences of their bad choices and bad actions.

Q: THEN WHAT MAKES YOUR STORIES CHRISTIAN FICTION?

A: My stories always have an element of faith in them. How that plays out depends on the individual plots of each specific story. My main characters are always on a spiritual journey, though some may be further along than others.

One more word about Christian Fiction, it has changed dramatically over the past ten years. Other than erotica, readers can find their favorite genre as Christian Fiction as well as mainstream fiction. There are Christian Fiction books out there for every book lover—historical; romance; regency; science fiction; even horror novels.

Q: IF DARK ALLEYS BECOMES A MOVIE WHO WILL PLAY THE MAIN CHARACTERS?

A: Wouldn’t that be awesome? Usually, I have a hard time with this question but not this time. Tessa would be played by Demi Moore and Mark Lawrence (the detective) would have to be Richard Gere. And the politician would be Bruce Willis—if he would agree to act with Demi!

Q: WHAT ARE YOU WORKING ON NOW?

A: I have a Christmas novella that I’m finishing final edits on. It’s being published by Harbourlight Books and will be out in November or Decemeber. It’s called THE CHRISTMAS STALKING. It’s my first novella I’ve written and I loved that format so it won’t be my last.

Here’s the back cover blurb:

The Christmas Stalking: During the Christmas holidays, a country music star hides out from a stalker at a remote cabin in upstate New York. Destiny knows fame always comes with a price, but she’s tired of being a prisoner of the very fame she sacrificed so much for.

Terrorized by an unknown stalker and fearing for her life, she escapes to the summertime home of her youth. She yearns for a simpler life, but her fame follows—and so does her stalker.

The cover for THE CHRISTMAS STALKING is so awesome, you should take a look at www.lillianduncan.net

Q: HOW CAN READERS FIND YOU ON THE INTERNET?

Thanks for sharing with us, Lillian, and the best of luck to you with DARK ALLEYS.