EVER TRY TO EAT A POMEGRANATE? 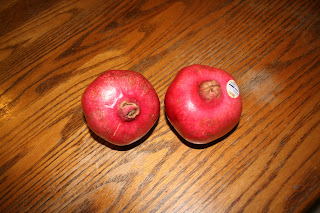 But I don’t love trying to get out the juicy seeds to eat.

It wasn’t until I was pregnant with my third child that I discovered Pomegranates. And then it became one of my pregnancy cravings. Ever since I’ve loved them. Up until then I had never even heard of them, naively thinking they were a new creation. So you could imagine my surprise when I was reading my Bible and ran across the word POMEGRANATE! And not just once, but several times. It seems they used them for decorations quite often.

Each year when pomegranates are in season, I pick up one here and there. And each time I kind of regret my purchase.

Because it’s so much work to eat them! It’s slow and tedious, not to mention a messy process.

The other day while at the store in the produce section, I spotted the largest, shiniest, reddest pomegranate I’ve ever seen. I just had to have it … yet I hesitated. Would it just sit on my counter, calling my name while I dreaded the process to eat it?

Then I saw it! A green plastic contraption. I picked it up and read the label. Right! Sure it will do that. But hey, it was worth a try, so I stuck it in my cart and headed for the cashier, along with the pomegranate made for the Incredible Hulk.

So here it is. Noting fancy, right? 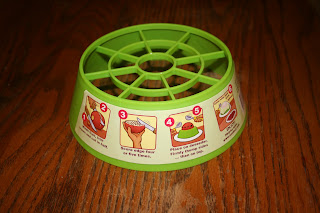 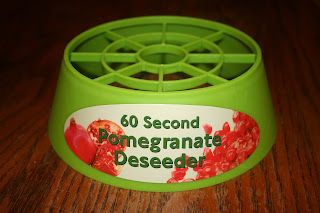 After a few days of sitting in my kitchen, I finally decided to see if I had wasted my money.

What happened next was nothing short of a miracle.

I could hardly believe my eyes.

The process, trim off crown, cut in half, score four or five places around the edge, turn upside down on grate, tap (I used an ice cream scoop), and ta da! All the seeds dropped below to the plate.

There were a few pieces of the flesh that I needed to pick out, but once I did, I dumped all the juicy red seeds into a bowl and dug in, eating them by the spoonful. Something I’d never been able to do before. What a treat. 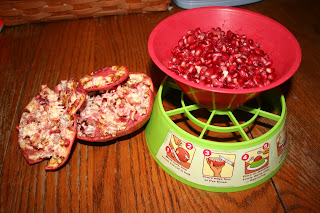 You can bet I’ll be buying many more pomegranates then ever in the future. Give one a try. You'll be amazed.

I just buy a pot of ready-removed seeds (arils, I think, is the correct name) and eat them with a spoon.

But then I buy my garlic minced, in jars. There are some culinary tasks for which life is too short.

Wow, I never heard of the ready-reomoved seeds. Though I have to admit I'm cheap, so I think I'll stick to pounding them out. :-)

All the work discourages me to buy them, but I'm going to try to get one of these.

Tammie, I recommend that you do, for you'll be amazed.