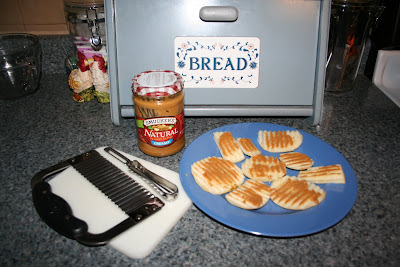 APPLE CHIPS…what in the world are apple chips?

When my youngest daughter whom loves apples, asked my eldest daughter to peel and cut up an apple for her, she decided to use the crinkle cutter instead of the apple wedger. Why? Only a thirteen-year-old knows.

So she peeled the apple and then sliced it with the crinkle cutter, making apple slices with ridges, thus looking like ruffled potato chips. Now each time my youngest daughter wants an apple peeled and cut, which is often, she asked for apple chips.

In the beginning she’s tried to fool me by asking for chips, knowing she’d not be allowed potato chips at the time she was asking for them. Then she’d later laugh and let me know she meant “apple chips”.

Soon after “our apple chip invention”, she decided she’d like peanut butter on them. So now our apple chips are spread with peanut butter as well. I can’t complain, it’s a health treat after all. I’ve made them so often now; they have me hooked on them as well.

Imagine that…the kids getting their parent hooked on a healthy snack rather them the other way around.
Posted by Kym McNabney at 6:07 PM

Sounds great. I've been craving cooked apples. I guess it's that time of year?

I love the idea! Everyone in my housewhole LOVES apples anyway you can prepare them.
I have a crinkle cutter,too so I think I'll surprise my granddaughter with this little treat tomorrow when she gets off the bus. Thanks!

First of all you don't look old enough to be a grandmother. Second, I have a feeling your granddaughter is going to think you're the best for making "apple chips". Hope she loves them as much as my kids do.

What a great idea!!! Sometimes it's all in the texture and presentation.

Kara(my granddaughter)loved the apples!! A healthy and cute snack, what more could you ask for *grin*
Once again, thanks for sharing the apple chips!

Oh and thanks for saying I didn't look old enough to be a grandmother, it made my day!

Glad to hear your granddaughter loved the apple chips. Thanks for letting me know.