A STORY THAT NEEDS TO BE TOLD 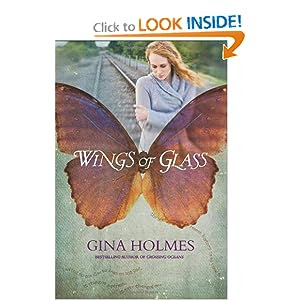 
When I spot a book with the name GINA HOLMES on it, I don't hesitate. I purchase it. WINGS OF GLASS is the third book I've read by MS HOLMES, and it won't be the last. Each one takes me on a journey, and heightens my ambition to write.

Penny Carson is young, naïve, and broken, when Trent Taylor enters her life. He sweeps her off her feet with the promise of a better life.

Trent is not what he seems to be. He's manipulative, drinks too much, and controlling, like so many men that abuse their wives. He has a past that made him the man he is today, just as Penny has one that allowed her to be in such a relationship.

WINGS OF GLASS is a story that needs to be told. Those that have not been in an abusive relationship can't begin to understand what one goes through. It's so easy for those that have not, to be perplexed why one wouldn't just walk away.

WINGS OF GLASS gives readers a glimpse into the world of an abusive marriage, whether verbal or physical, or a combination of both. MS HOLMES touches on what a wife would go through, as well as the husband and those that have a loved one that's in such a situation. It's so easy for us to point fingers and judge. But what we often don't understand is the story behind the story.

MS HOLMES writing and storytelling never fails. She is a master at stringing words together, and telling a story that will keep readers engaged from the first to the last word.
Posted by Kym McNabney at 4:33 PM