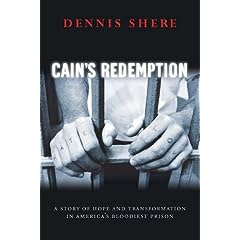 Another prison book recomendation. This is my review on, Amazon.
1 of 1 people found the following review helpful:
An Amazing Story and An Amazing Place., September 23, 2008
By
Kym McNabney (Illinois) -

This was a very inspiring story. A well written book that will send you on an emotional rollercoaster. This book IS NOT filled with a pack of lies, as one review seems to think. I met Dennis Shere, and Warden Cain, along with many of the inmates and those that work at Angola. Of course Angola is not a perfect place, run by perfect people, or has only perfect inmates. I don't believe that anyone ever made that claim. But what it is, is an amazing place with amazing things happening. Anyone who doubts this, start visiting different jails and prisons in your area, then go to Angola for several days, and tell me God isn't at work there.
The system is screwed up. The government is screwed up. People screw up. But God is good. With Him, all things are possible. I stayed at Angola for eight days. I ate there, slept there, worshiped with those that worked there, and those that were doing time there. I was so moved with what was going on there, I didn't want to leave.
I'm involved in the prison ministry and write to several inmates, including a handful from Angola. Great men with big hearts and a genuine devoted love for God. Look at how crowed our prison systems are! What the statistics show the reentry rate is. Isn't it obvious we're doing something wrong! I truly believe in my heart, that if all prison systems would adopt what Burl Cain is doing, along with places like, Koinonia House, in Illinois, and other great ministries, we would find a big dent in the cost of our prison system, for we would be truly reforming criminals, instead of slapping a number on them and writing them off. That's just not working...hello.
Hebrew 13:3 "Don't forget about those in prison. Suffer with them as though you were there yourself. Share the sorrow of those being mistreated, as though you feel their pain in your own bodies."
Posted by Kym McNabney at 8:51 AM