WHAT WE DO FOR OUR KIDS! 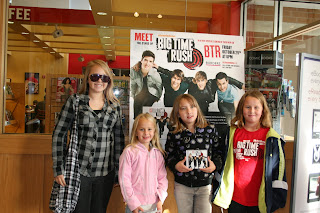 I’ve been blessed to meet and get many autographs in my life from famous people, singers, and authors. Each experience has been a bit different. Some better than others.

My two youngest daughters’ are HUGE BIG TIME RUSH fans so when I happened to discover they were going to be signing their CD’s at a Borders nearby, there was no way I could say no.

Little did I know the adventure I was about to embark on.

So I asked the woman at Borders what time she thought would be a good time to be there in the morning. She wasn’t sure but thought when they opened at nine would be fine. After my questioning the time she said that if I wanted to be safe 8:30AM, 8:00AM should be good. Into our conversation she mentioned that I could purchase the CD’s ahead of time…as long as I had a receipt to prove I’d purchased them from Borders. It might help me to obtain a wrist band sooner that day.

As the days slipped by I decided I’d purchase the CD’s ahead of time. So off to the store near my house I went to purchase three CD’s. One for my two youngest daughters and one for their friend that would be going with us. The only problem was, when I got to the store they only had two left! The store clerk called around and the closest Borders to have a copy was seventeen miles away. The very Borders we’d be going to, to meet BIG TIME RUSH.

So my husband was kind enough to make the trip to get the extra CD. A week later, my eldest daughter decided that now SHE would like to meet BIG TIME RUSH as well. So I went back and forth to whether or not I would make the trip to purchase yet another CD. Mind you we already had a CD that we’d ordered directly from BIG TIME RUSH before we knew about this but in order to get the wrist bands, you HAD to be purchased them from Borders. And I had asked my daughter several times if she wanted to go early on. Anyway, one day while out shopping in an area I only go to every couple of months, I spotted a Borders that I’d been told the week before had no copies of the CD. But I decided to stop anyway. You just never know. So I did, and thanks to God they had just received two in!

I was so worried about getting up on time, and what awaited me, and if I’d be one of the lucky 600 that I never did fall asleep. When my alarm clock went off at 3:30AM, I pulled myself out of bed and got ready... Slowly. After all, I’d probable me the only fool there!

As I approached the Borders at 4:45AM, my jaw dropped when I spotted the parking lot. It was full! And not only was it full, there were tents…that’s right, TENTS set up. I walked past the tents and people, many with lawn chairs with sleeping bags and pillows. There was even one person with a tray table set up with a laptop on it! There were moms, and dads, and teenage girls.

Okay, so I’m not the only crazy parent/person in the world!

So I made my way around the building to my place in line, about number 105. There I quickly met others around me, and talked about how insane we were to be there so early in the wee hours of the morning, in the dark, in 33 degree weather…all for a “chance” for our children to get to meet BIG TIME RUSH.

In the end, I was excited to leave with my four wrist bands for the girls. I’m not sure if lack of sleep and the whole ordeal had something to do with it but I left with tears in my eyes, as well as thanking God for allowing my girls this opportunity. You see, I knew now much this would mean to them, and after talking about it for the past couple of week I hated the thought of how disappointed they’d be if I didn’t get them…and how disappointed I be after all I went through in hopes of making my girls dream come true.

I must say that having the CD's purchased ahead of time, and going at 4:45 in the AM made a HUGE difference. You see, they let the people that had purchased the CD's ahead of time, go in first! There’s another story behind that… 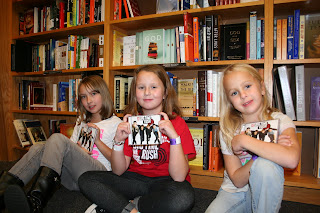 That night when I went back with the girls, we had to wait for an hour and a half before BIG TIME RUSH was to arrive. But the girls never complained. We actually met people in line, as well as I saw most of the folks I’d stood beside in line that morning with. We sat in our assigned area, on the second floor in the religious section. I have no doubt that wasn’t a coincident; for I truly believe that it was God that blessed this special occasion. 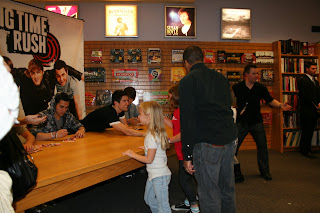 Finally after another hour or so it was our turn. The girls could hardly contain their excitement. Even though you weren’t allowed to take pictures with them, and only allowed to have them sign the one CD you paid for, the girls were thrilled. It was a very quick process and though I wish it wasn’t so rushed, I must say I was happy that each of the girls received a high-five, or handshake from each of the boys. They truly seemed to give their attention to them, however brief it was and with all the distractions it couldn’t have been easy. 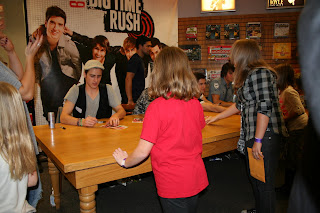 So, would I do it again? 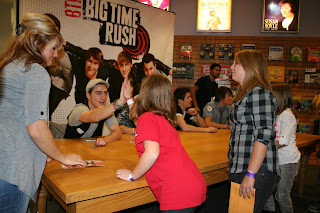 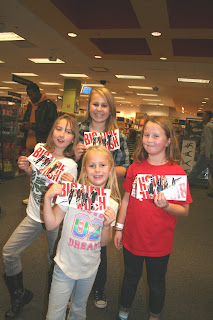 Thanks BIG TIME RUSH, you were awesome!

What an adventure! I think you deserve a mom-of-the-year award for doing this for your girls. Wow! :-)

Thanks,Maureen. As silly as it may seem to some people, I knew how much it would mean to my girls. And I did get to meet some really nice people. I was just glad it all worked out for them.

Big Time Who?? I'm so out of the loop apparently! But then again, my kids are seventeen and twenty-one! Sounds like you had a blast!

Cute, Catherine. Yes, I went from Barney and Dora to Hannah Montana and the Jonas Brother. I sit at my computer in the family room while they watch these shows so I can't help but get glimpses of them...and start singing their songs. And the bad thing is l like them! I have many of the same songs they do on my iPod. Of course my 13 year old is a different story. She’s all NCIS, Bones, Supernatural and I won’t even get into the music she listens to.

I often think how much I’m going to miss those “kids’ shows once I no longer have any little ones. I’ve really enjoyed movies like THE BEE MOVIE, TOY STORY, and so much more. I doubt I’ll take the time to go see them without young kids, much less even know about them. Then again, maybe that’s one of the blessings grandchildren will one day be. But let’s not go there, yet.

Sounds like a fun experience! Getting up at 4 in the morning though... yowch. I don't think I'd have been able to talk myself into that part!

K., trust me when I say that if I had not stayed up all night, it would have been very hard for me as well. I am so not a morning person. :-)

Awesome story, Kym! I never heard of Big Time Rush, but I sure do know about them now. What a great mother (and friend to your daughters' friend) you are!

Thanks, GF. It was a big day for the girls, and really, a lot of fun and a great experience.